Mourning My Wife and Best Friend

By Farooq A. Kperogi

This is far and away the most difficult piece I’ve ever had to write in my entire life. At first I had neither the emotional strength nor the desire to write this. Then when I stabilized emotionally and felt motivated enough to write I didn’t know what to write—or how to write. I put off writing this piece more than 10 times in less than two weeks.

How can I possibly capture, in mere words, the welter of emotions that continue to perniciously smolder the entire fiber of my being since the tragic passing away of Mrs. Zainab Musa Kperogi, my loving wife and best friend? Where do I start from? What should I say? What should I leave out? If this piece comes across as desultory and disjointed, it is because I have not resolved these questions.

When Zainab told me she would drive to Kaduna with our three kids to visit her twin sister, my instinctive inclination was to discourage her—as I often did. But I had no good reason to do so this time around. Her twin sister, Hajia Aisha, the only person with whom she shared both parents, had visited from her base in Kaduna twice in three months. And Zainab’s three-month maternity leave was going to expire on the Monday after the accident that took her life, which meant that she might not be able to return her sister’s visits in a long while. Plus, Hauwa (whom we call Sinani at home), our first daughter, always eagerly looks forward to visiting her cousins in Kaduna. So I thought it would be unreasonable to discourage her from traveling.

But I have an intensely deep-seated paranoia about road travel in Nigeria with which my late wife had become well-acquainted. I would often tell her that I was uncomfortable with the idea of her driving herself all the way to Kaduna, although she was by far a more skilful driver than I could ever hope to be. She would ask why and I would say it was because of the unsettling stories I’d always read about whole families perishing in car crashes in Nigeria. But she would say, “God forbid! By Allah’s grace, that won’t happen to us.” But those assurances had been little comfort to me.

So on June 4 when she, along with our three children and her paternal half-brother’s maternal half sister who helped her with domestic chores, set out for Kaduna, I was severely apprehensive—as I always had been each time she drove herself to Kaduna. This apprehension manifested forcefully in my dreams. At exactly the time she had the accident, I had a dream of her coming out of a car looking noticeably depressed. My recollection of the dream is indistinct now, but I recall that I was angry with her over something she did and I flew into a rage. But she was uncharacteristically calm and penitent.

The sangfroid and grace she showed in the face of my petulant flare-up disarmed me. So I went and hugged her and apologized for my childish outburst. She forgave me without questions. And that got me even more emotional. I cried hysterically and assured her that I loved her way more than my fragile male ego allowed me to admit.

I woke up in convulsive gasps of sobs. I then decided that when I called her in a moment’s time (although I’d just woken up in Atlanta, it was late afternoon in Nigeria) I would give her the same assurances of my undying love that I’d given her in my dream. Just then I got a call from my wife’s twin sister’s husband, Dr. Ibrahim Okunade, who teaches physics at Ahmadu Bello University, Zaria.

After observing the familiar conversational civilities rather clumsily, he said, “Farooq, it has happened o!” And he started sobbing uncontrollably. My instincts immediately told me what it was that had “happened” but I’d perversely hoped against hope that it was someone else it had “happened” to. “Zainab died in road accident a few minutes ago,” he said. I almost fainted. Then he added immediately: “But the three children survived unharmed.” It was like someone had pushed me to the frightening edge of a very steep cliff and then pulled me back again just when I was about to fall off.

My world as I know it has crumbled irreversibly. It will never be the same again. I am learning to come to terms with that tragic, soul-depressing fact. Zainab was everything to me. She was first my best friend before she became my wife and mother of my children. We fell in love the first day we set eyes on each other in May 1999 at the Weekly Trust head office in Kaduna where I had been a reporter for nearly a year. Then it turned out that we shared similar passions. She was an English grammar nerd—like I am. (She studied English and Language Arts at the University of Ibadan). Lively discussions and arguments about English grammar and style were the stuff of our interaction in the first few months of our courtship. 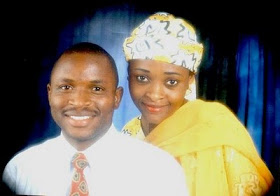 Zainab was one of the most brilliant grammarians and writers that I’ve ever known. But she was so modest and self-effacing about her intellectual strengths that she didn’t often get the credit or recognition that she deserved. Plus, because of the prevailing patriarchal arrogance of our society, people often whispered behind her back that I wrote most of her pieces. This worried her a lot. The truth is that we were each other’s editors and writing coaches. She spruced up my pieces as much as I did hers. But no one, to my knowledge, ever alleged that she wrote my articles.

In Zainab I had the most supportive wife that anybody could ever hope for. Before we got married, for instance, I told her of my intention to pursue graduate studies in the United States. I even suggested that we delay our wedding until I got my Ph.D., but she assured me that marriage wouldn’t stand in the way of my aspirations. She promised to give me all the support I needed.

And, sure enough, she was the happiest person when I was accepted to study for my master’s degree at the University of Louisiana, Lafayette, just two years after our wedding. To demonstrate her commitment to her promise to support my aspirations, she actually paid half of my airfare to the United States and had been supportive of me in ways words are incapable of expressing.

Hardly any day passed by without us speaking on the phone or having video chats on Yahoo! Messenger or Skype. Of course, there was no summer that we didn’t visit each other for at least three months. But she resisted relocating to the United States because, by U.S. immigration laws, she would not be able to work until and unless my immigration status changed. She didn’t want to be entirely dependent on me.

Zainab was also the most kind-hearted person that I’ve ever known. One of her greatest passions was to help people who were less well-off than she was. She couldn’t live with the thought of keeping “bulk money” while other people suffered. That’s why she had no savings. Two days before her death, she asked me to send her some money in addition to the monthly upkeep allowance I sent to her. It turned out that she actually withdrew half of her own salary, added it to what I’d sent to her, and then deposited various sums of money to the accounts of five different needy people on the Friday that she died. She was compulsively kind-hearted but in ways that weren’t apparent to many people.

She also always gave money to my parents, siblings, and extended family members without even informing me. My mom and dad always wondered what they had done to deserve the uncommon graciousness and kindness they got from Zainab. But her grace wasn’t limited to giving unsolicited money to my family members; she was also like the glue that cemented cracks in my family wall. Just two days before her death, for instance, she settled a long-drawn-out quarrel between my younger sister and me. She would also often remind me to touch base with family and friends, alert me of the birthdays and anniversaries of family and friends, and advise me on what kinds of gifts to give to people.

But Zainab’s death isn’t inconsolably heart-rending only because she was my wife, best friend, and confidante, or because she was generous, benevolent, obliging, and deeply religious; her death is tragic also because it dramatizes the illogic and meanness of this life. Life was unfair to her from the cradle to the grave.

Her  mom, after whom we named our second daughter, Maryam, was in a coma for 12 days after she gave birth to her and twin sister, Aisha, who teaches environmental science at Kaduna Polytechnic. Shortly after their painful birth through C-section, their dad and mom divorced mysteriously. So they were raised by their dad’s wives in harsh, loveless conditions. And just when they got into the university, their stupendously wealthy dad died at the age of 47. They were cheated out of the massive inheritance their dad left behind: they didn’t get a penny from it. Then less than 10 years after their dad’s death, their mom also died in a car crash.

But she wasn’t bitter. She found refuge and strength in Islam and always hoped and prayed that things would change for the better soon. I was scheduled to graduate with my Ph.D. this December. This prospect—and what it entailed for us— excited her intensely, as it did me. The whole family was planning to attend my graduation. And then, suddenly, without warning, she died in a cruel, violent accident, leaving behind three innocent kids, including our three-month-old Adam who will never know the soothing motherly care and comfort that only she could give. Who says life isn’t a bitch?

But we can’t afford to give in to the disempowering tyranny of despair. That would be a disservice to the perpetual optimism that defined Zainab’s life. We can only pray that her soul—and that of Tobi, her half-sister who also died in the car crash—rest in peace.

I also want to use this opportunity to express my gratitude for the effusion of empathy and support I’ve been receiving from friends, fans, and family since her death. May God reward you all.

Related Articles:
Grieving in America
Zainab: One Year After, It Still Feels Like a Dream
Farooq A. Kperogi at 8:31 AM
Share

Please share your thoughts and opinions here. I read and appreciate all comments posted here. But I implore you to be respectful and professional. Trolls will be removed