A few weeks before Afghan-American psychopathic terrorist Omar Mateen murdered 50 people and injured 53 others at a gay nightclub in Orlando, Florida, I was involved in an email dialogue with a group of conservative Americans over homosexuality and women’s rights in Islam.

The conversation was instigated by a cheeky, if ignorant, conservative cartoon that was intended to poke fun at Muslims and American liberals. The cartoon basically implied that the punishment for homosexuality in Islam is death by hanging and that women have no rights in Islam but that naïve, oversensitive American liberals who mollycoddle every marginal group in the country will never have the nerve to condemn these retrograde values unless they are identified with conservative Republicans.
In the cartoon, a man strikes up a conversation with a liberal American woman. “I don’t believe that women have any rights, and I think gays should be hanged,” he says.

“Wow, what a primitive asshole you are! You must be a Republican,” the liberal American woman says in response.

“No, actually, I am a Muslim and those are my religious beliefs,” the man says.

“Oh! I am sorry! I apologize! I hope you don’t think I’m Islamophobic!” the liberal American woman says. 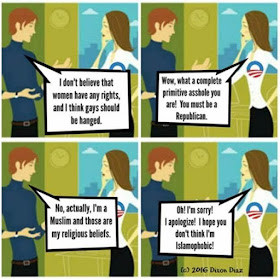 People on the email list, almost all of whom were white American conservatives, got a kick out of the cartoon. It reinforced their prejudices. It gave comfort to the ethnocentric biases they cherish about Muslims. My friend, who is also a white American conservative, copied me on the email precisely because he knows me to be politically liberal and culturally Muslim.

I initially chose to ignore the cartoon. I thought my intervention wouldn’t do much to persuade these cognitively simple American conservatives to abandon the prejudices that have found homes in their hearts and minds. But something told me to intervene. So I did.

I hit the “reply all” button and composed this response: “I know this is just a cartoon whose goal is merely to give us cause for a little chuckle, but its premise is too factually inaccurate to be left unchallenged. Muslims don't believe women have no rights, and the punishment for homosexuality in Islam isn't death by hanging.

“Muslim women have been entitled to inheritance, for instance, since the 7th century when most parts of the world treated women as property. This right is enshrined in the Qur'an, the Muslim holy book…. Of course, there is no denying that many Muslim women are oppressed in many Muslim societies, but Muslim women have way more scripturally codified rights in Islam than many non-Muslims are aware of.

“As for hanging homosexuals, the Qur'an has not prescribed any punishment, much less the punishment of ‘hanging,’ for homosexuality; it only condemns it. However, some Muslim theologians over the years have ruled that homosexuals should be ‘executed.’ Others say they should be ‘stoned.’ Yet others say they should be thrown from a high building. But all agree that these harsh penal prescriptions have no doctrinal basis in the Muslim holy book. No homosexuals were ever punished, much less executed, during the lifetime of the prophet of Islam, leading some Muslim scholars to maintain that there is no scripturally sanctioned punishment for homosexuality in Islam.

“The Bible, on the other hand, is unambiguous on the punishment for homosexuality. According to Leviticus 20:13, ‘If a man lies with a male as with a woman, both of them have committed an abomination; they shall surely be put to death; their blood is upon them.’”

Nobody responded. I don’t know why. Perhaps they looked up my claims and found them to be accurate. Unfortunately, about two weeks after this, Omar Mateen, who was apparently a closet gay, murdered 50 gay people in cold blood for no reason other than that they were gays. And both he and others attributed this barbarous mass slaughter to inspiration from his Muslim faith.

While I was ruminating over this senseless mass murder of innocents and my email correspondence with the conservative Americans on the position of Islam and Christianity regarding punishment for homosexuality, I came across the news story of a pastor called Steven Anderson who celebrated and justified Mateen’s mass murder of gay people in Orlando.

In a sermon posted on YouTube, Pastor Anderson said, “The good news is that there’s 50 less pedophiles in this world, because, you know, these homosexuals are a bunch of disgusting perverts and pedophiles.” Then he adds: “I don’t believe it’s right for us to just be a vigilante… But I will say this: The Bible says that homosexuals should be put to death, in Leviticus 20:13….[T]hese people all should have been killed, anyway, but they should have been killed through the proper channels, as in they should have been executed by a righteous government that would have tried them, convicted them, and saw them executed. Because, in Leviticus 20:13, God’s perfect law, he …put the death penalty on homosexuality. That’s what the Bible says, plain and simple.”

This wasn’t the first time he advocated the murder of gays. In a December 1, 2014 sermon (which is still on YouTube), he told his congregation that “If you executed the homos like God recommends, you wouldn’t have all this AIDS running rampant.”

The wacky Westboro Baptist Church also celebrated the mass murder of gays in Orlando and even said, in a statement, that “God sent the shooter” to destroy “Sodom America.” Similarly, a pastor in Sacramento, California, according to a June 14, 2016 story in RawStory.com, said this to his flock in the aftermath of the shooting: “Hey, are you sad that 50 pedophiles were killed today? No … I think that’s great. I think that helps society. I think Orlando, Florida’s a little safer tonight…. The tragedy is that more of them didn’t die.” (Raw Story chronicled other “Christian leaders [who] showed their love by celebrating the Orlando nightclub massacre”).

Now, what am I getting at? There is always the potential for murderous extremism in the lunatic fringes of religions, including Islam and Christianity. The difference is that in contemporary society there is institutional and cultural restraint to act out violent religion-inspired fantasies in the West, while there is little or none in most parts of the Muslim world.

Although the Bible sanctions the murder of homosexuals, the worst that homosexuals have suffered in the hands of Christian fundamentalists is rhetorical violence. And while there is no punishment for homosexuality in the Qur’an, it’s easy for extremists in Islam to invoke weak hadiths and questionable theological arguments to commit mass murder.

In a strange way, the conservative cartoon whose intent is to mock Muslims perfectly captures the paradoxical unity in extremism between culturally conservative Republicans (who are often fundamentalist Christians) and Muslim extremists. The gay mass murder and its aftermath prove this.

Please share your thoughts and opinions here. I read and appreciate all comments posted here. But I implore you to be respectful and professional. Trolls will be removed