Justice Ibrahim Tanko Muhammad’s Supreme Court will go down in history as easily Nigeria’s most blatant bastion of supreme injustice. In the last one year, it has shaped up to be the graveyard of electoral mandates.

It either sanctifies transparent electoral heists, such as Buhari’s blazing mandate theft, using the most astonishingly illogical arguments or reverses approximations of people’s choices such as in Zamfara, Imo, and Bayelsa. In inflicting legal violence on people’s choices, the Supreme Court appears to have no care for basic consistency. 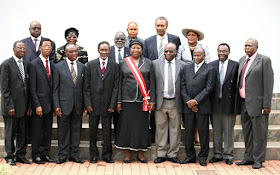 I initially thought Degi-Eremieoyo forged his certificates—like many Nigerian politicians do. But he apparently didn’t. He only changed his names—and the spellings of some—in the course of his life, and supported some of the changes with sworn affidavits. But the Supreme Court was persuaded that those changes were sufficient grounds to invalidate the legitimate votes he and his boss earned from Bayelsa voters.

This is both culturally insensitive and a violation of the sanctity of the vote. I will only discuss the cultural insensitivity of the judgment because it has implications for a whole host of Nigerians. Because there’s a vast disconnect between the colonially inherited orthography we use and the sound systems of our indigenous (and, in some cases, borrowed precolonial) languages, it’s impossible to maintain consistent spellings for all our names.

For instance, my credentials have many variants of the spelling of my first name. In my primary school certificate, my teacher spelled it as “Faruk,” and there’s nothing I can do about that. When I got to secondary school, I realized that the correct orthographic rendition of the name from Arabic is “Farooq,” so I adopted that spelling.

However, when Bayero University issued me my certificate, I saw that my name was spelled as “Farouk” even though I’ve never spelled it that way. Should I be held responsible for this? But it gets worse: my transcript spells my first name as “Farooq.” In other words, my certificate and my transcript have different spellings of the same name.

To make matters even more complicated, a few years after my graduation from the university, I changed my last name from Adamu, which is my father’s first name, to Kperogi, which is my family name that my father, uncles, and cousins, bear (bore in the case of my dad) as their last name.  Is the Supreme Court suggesting that I can’t win an election because of the differences in the spellings of my names and because I changed my last name to my family name?

The inconsistencies in the names we bear in Nigeria can sometimes start from our birth certificates. For instance, when I was born in a Baptist missionary hospital in my hometown, a white American nurse by the name of Miss Masters who delivered me and who could speak, read, and write my native Baatonu language, wrote my name as “Imoru Sabi” in my hospital birth certificate.

Apparently, my father told her my name was “Umar Farooq.” But she used her judgment to take only “Umar,” which she chose to write as “Imoru”—exactly the same way an uneducated Borgu person would pronounce Umar—and added “Sabi,” the generic name for every second son in Borgu, as my middle name.

For some reason, she entirely omitted “Farooq” (which she might have spelled as “Faruku” given her penchant for Borgu phonological fidelity) from my name, but that was the name by which I was known and called when I grew older. No one called me Umar or Sabi.

That was why when I came of age and my father handed my birth certificate to me, I told him it wasn’t mine. I knew I was Sabi by default since I am my parent’s second son, but no one ever called me that, and “Imoru” totally threw me off until my dad explained to me what had happened. 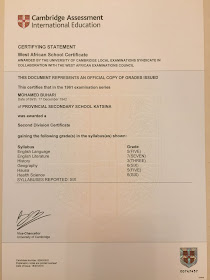 In any case, Muhammadu and Buhari are his first and middle names. By the way, why doesn’t he bear a surname? Most importantly, though, the British colonial educators who registered Buhari at the Provincial Secondary School in Katsina spelled his name as “Mohamed,” and it’s that variant of his name’s spelling that still appears in his school certificate, which I am now convinced he actually has, contrary to widespread notions that he doesn’t.

However, although the official records of his secondary school spell his first name as “Mohamed,” he prefers to spell it as “Muhammadu.” In spite of the discrepancy between the official spelling of his name in his school certificate, about which he lied under oath that it was with military authorities instead of admitting that he had lost it, the Supreme Court said he was “eminently qualified” to stand for election. 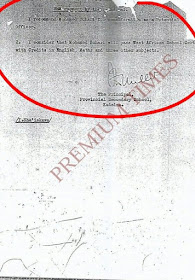 If Buhari was “eminently qualified” in spite of the different spellings of and possible inconsistencies in his name from primary school to now, why should Degi-Eremienyo be disqualified? Why is what is good for Buhari bad for Degi-Eremienyo?

Now the elephant in the room is that Degi-Eremienyo is still a senator. If he was unqualified to be a deputy governor by reason of the inconsistent spellings of and changes to his name, can he be qualified to be a senator? Can his opponent sue to be declared the rightful senator of Bayelsa East Senatorial District even though he lost the election?

This goes to the heart of the doctrine of judicial precedent, which the Oxford Dictionary of Law defines as “judgement or decision of a Court used as an authority for reaching the same decision in subsequent cases.”

Clearly, Tanko’s Supreme Court, as I pointed out in my July 20, 2019 column titled “A‘Technically’ Incompetent Chief Justice of Nigeria,” doesn’t give a thought to precedents. That’s why its judgements are characterized by inconsistencies, and why there’s a spike in the number of lawyers who are asking the Court to review its judgements.

“All over the world, courts rely on precedents to adjudicate current cases,” I wrote in my July 20, 2019 column. “Precedents may be modified, but they are rarely overturned without a compelling reason, certainly not within a few years after they were established. That is what legal scholars call stare decisis, that is, the doctrine that courts should follow precedent. A Chief Justice that is ignorant about something as basic as ‘technicality’ is unlikely to know what ‘precedent’ means, much less something as rarefied as the doctrine of stare decisis.”

If Nigeria had a real parliament, I would have suggested that the National Assembly pass a law to undo the judicial violence of Tanko’s Supreme Court. Well, this is what you get when every branch of government is an extension of a confused and feuding executive branch.
Farooq A. Kperogi at 10:38 PM
Share