The Tragedy of the Abba Kyari Surrogate Presidency

Premium Times’ February 17 unmasking of National Security Adviser Babagana Monguno’s secret memo, which revealed that Abba Kyari, Buhari’s Chief of Staff, exercises presidential powers on Buhari’s behalf, is only the official confirmation of what I have written in many columns and social media updates in the past two years.

The truth is that Buhari has no cognitive, emotional, physical, not to mention intellectual, capacity to be president. And, since nature abhors a vacuum, Abba Kyari has filled the void that Buhari’s emptiness has created. 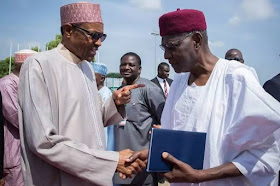 Sometime in the midpoint of last year, a northern retired general told me Abba Kyari said in private that people who vilify him don’t realize that without him Nigeria would be rudderless and descend into chaos.

He is probably right. When a man who fancies himself as “president” is so wracked by dementia and cognitive decline that he can’t hold a meeting for more than 10 minutes, has lost the ability to follow conversations in a meeting, and has zero short-term memory, someone needs to act on his behalf.

That Buhari is almost wholly emotionally and intellectually dependent on Abba Kyari is no secret in Aso Villa, but it came out in the open when Buhari himself publicly told his newly appointed ministers that Abba Kyari is the only way to him. In any case, most of the ministers were appointed by Abba Kyari.

Kyari also made—and continues to make— some of the most consequential appointments of the last five years. For instance, he singlehandedly appointed INEC chairman Mahmood Yakubu, DG of DSS Yusuf Magaji Bichi, and CJN Ibrahim Tanko Muhammad, among others too numerous to mention.

That was why Kyari could summon INEC chairman Yakubu to the Presidential Villa on October 26, 2018 to instruct him on how to conduct the forthcoming elections. As I wrote in my January 5, 2019 column titled, “INEC’s Troubling Missteps Amid Aso Rock’s Desperation,” what happened on October 26, 2018 had no precedent.

“The Chief of Staff to the President is not a constitutionally recognized position,” I wrote. “He has no legal powers to summon the INEC boss for a meeting.” Of course, I knew that Yakubu was beholden to Kyari because he owes his position to him.

Kyari rode to his current cushy surrogate presidency through Mamman Daura, Buhari’s nephew, who has been Buhari’s link to the northern political mafia and to transnational financial transactions since 1983.

In researching the genealogy and rhetorical techniques of Nigerian crime syndicates for a book I am working on, I came across an insightful 2016 book by Professor Stephen Ellis titled “This Present Darkness: A History of Nigerian Organized Crime,” which spells out the link between Mamman Daura and Buhari.

On page 132 of the book, which was published by Oxford University Press, Ellis writes: “The Kaduna Mafia is said to have ‘dictated to President Shehu Shagari how Nigeria should be managed’ during his tenure from 1979 to 1983….Buhari’s main connection to this group was through his nephew (although slightly older), Mamman Daura.

“Mamman Daura became a director of Bank of Credit and Commerce International (BCCI), which set up shop in Nigeria in 1979 and became the favorite bank of the ruling group, performing all manner of illegal transactions on behalf of its elite clients.” Daura became director of the defunct Karachi- and London-based BCCI through his father-in-law, Alhaji Ibrahim Dasuki, who had controlling shares in the bank’s Nigerian branch.

Note that, according Peter Truell and Larry Gurwin in their 1992 book titled “False Profits: The Inside Story of BCCI, The World's Most Corrupt Financial Empire,” BCCI was a sensationally fraudulent bank that engaged in high-profile  transnational money laundering, including for dictators such as Saddam Hussein, Manuel Noriega, and Samuel Doe.

The Washington Monthly magazine, in a September 4, 2004 investigation titled “Follow the Money: How John Kerry busted the terrorists' favorite bank,” also found that BCCI laundered money for such criminal corporations as the Medellin Cartel and Abu Nidal and for terrorist kingpins like Osama bin Laden. In fact, Washington Monthly quoted a senior U.S. investigator to have said, "BCCI was the mother and father of terrorist financing operations."

Of course, there’s no evidence that the Nigerian branch of BCCI was involved in terrorist financing, but the same Mamman Daura who served as the conduit between Buhari, the Kaduna Mafia, and BCCI in the 1980s also introduced Abba Kyari to Buhari much later. Mamman Daura, in addition, facilitated Abba Kyari’s employment at the defunct African International Bank, an offshoot of BCCI, which was forcefully liquidated in 1991.

In other words, Abba Kyari’s connection to Buhari via Mamman Daura possibly follows the money. Relationships nurtured by the kind of money that binds Daura, Kyari, and Buhari are hard to dissolve. It’s particularly difficult when the man who is supposed to be “president” has, due to dementia, lost all sentience and is dependent on a younger, more educated, if unethical and rapacious, Kyari for directions on what remains of Nigeria’s pretense to governance.

In his surrogate presidency, Kyari is redefining the limits of audacious impunity and primitive acquisitiveness. For instance, in an unprecedented move in July 2016, he appointed himself a member of the NNPC Board and got insentient Buhari to sign off on it!

When Air Vice Marshall Mukhtar Muhammed, Buhari’s close friend who died on October 1, 2017, read about Kyari’s appointment to the NNPC Board, he was concerned because there was no precedent for it. So he called Buhari to let him know that the optics of the appointment were bad, but he was shocked when Buhari told him it wasn’t true that he had appointed his Chief of Staff as a member of the NNPC Board, even though he actually signed off on the appointment.

It turned out that Buhari didn’t know what he signed off on. Someone close to the late AVM Mukhtar Mohammed told me this story a few months after it happened. That was the moment I began to suspect that Buhari was held hostage by dementia. No one knows this more than Abba Kyari, who is taking advantage of it to the maximum.

Sahara Reporters reported on September 20, 2016 that “Buhari [was] presented with evidence his Chief of Staff took [a] N500m [bribe] to help MTN reduce fine.” About three months after this exposé, MTN fired its top staffers who facilitated the bribe in order “to avoid scrutiny by the United States government over bribes offered to Abba Kyari, Chief of Staff to President Muhammadu Buhari,” according to Sahara Reporters’ December 23, 2016 story titled, “MTN Fires Amina Oyagbola Over Bribery To Buhari’s Chief Of Staff Abba Kyari.” 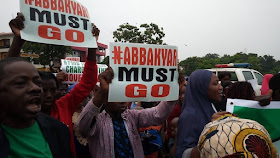 Abba Kyari is now literally a law unto himself. People lose their positions in government only when they fall out of his good graces. Buhari is now totally inconsequential. All the people who matter in this government know Buhari is merely a nominal head with no capacity to exercise actual power.

Power resides with Abba Kyari who is now transmogrifying into a Frankenstein monster that is about to devour even Mamman Daura, its creator.

The only way out of the tragedy of the current surrogate presidency is to impeach and remove Buhari on account of his incapacitation and treasonable abdication of responsibility to an unelected surrogate.

But that will never happen. Not with the current docile and malleable National Assembly that has fittingly been dubbed the “Rubber-Stamp National Assembly.” Nigeria is stuck!
Farooq A. Kperogi at 12:06 AM
Share