Chief of Staff as President Without Title and Buhari’s Babysitter

The Daily Trust of April 22 reported that there are at least “37 APC top shots” competing for the position of the Chief of Staff to Buhari. The names include serving governors and ministers. There’s no precedent for this in Nigeria’s history.

Now, ask yourself: why would governors and ministers want to give up all their guaranteed privileges for a position that isn’t even recognized by the constitution? 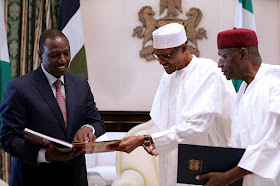 The answer lies in what I’ve been saying about Buhari for the last few years: that people close to him know that he is an infirm, diffident, intellectually insecure, and congenitally inept person who needs someone to do his job for him.

In other words, he has no capacity to perform the functions his position requires of him, but because he loves the title, attention, and perks that the position confers on him, he needs a babysitter, a political and intellectual babysitter.

Between December 1983 and August 1985 when he was a military dictator, that babysitter was Tunde Idiagbon. From May 2015 until this month, that babysitter was mostly Abba Kyari. In other words, these 37 APC top shots vying to be his Chief of Staff are positioning themselves to be president without portfolio. That’s as good as being president without standing for an election.

In my October 19, 2019 Saturday Tribune back-page column titled “Buhari’s House of Commotion and Mamman Daura’s ‘Glass House’,” I pointed out that Buhari has an enduringly infantile craving for a paternal dictatorship.

I chalked up Buhari’s primal longing for babysitting to the fact that he lost his father at an early age and didn’t quite experience sustained paternal guidance. He reminds me of a scholar I met here in the US who has never published a single-authored article or book even when he can. Because of a psychic lack in his formative years, he said, he feels vulnerable and inadequate without at least a second author.

For years, Mamman Daura served as Buhari’s emotional and intellectual fortress and father figure, although they are only about three years apart in age.

Daura introduced Buhari to the Kaduna Mafia, according to Professor Stephen Ellis’ book titled “This Present Darkness: A History of Nigerian Organized Crime,” which I referenced in my February 22, 2020 column titled “The Tragedy of the Abba Kyari Surrogate Presidency.”

If Buhari is sentient enough to make his own choice, which no one can guarantee at this time, he would most likely defer to Mamman Daura who is likely to recommend Education Minister Adamu Adamu, Buhari’s long-time associate and speechwriter who co-babysat him intellectually during his previous unsuccessful runs for president.

Bottomline: People in the inner circles of power in Nigeria know that Buhari is a barely living airhead who needs someone to make decisions for him.
How to Know if Aisha Buhari Takes Charge of Nigeria
First shared on Facebook and Twitter on April 21, 2020
There're two ways to know if Mrs Aisha Buhari, rather than members of the cabal, is wearing the trousers of the Buhari regime.
1) If Buba Marwa gets appointed as Chief of Staff to the President.
2) If my former teacher Garba Shehu is fired.
If only 1 of 2 above happens, it means Aisha and the cabal are sharing the trousers. If none happens, it means the cabal is still intact and in control.
Note, though, that Aisha, in spite of what she wants you to believe, isn't better than members of the cabal. They're all greedy power mongers who don't give a hang about everyday Nigerians.
Farooq A. Kperogi at 11:53 PM
Share