Aisha Buhari Would Be the First Victim of Social Media Law

If the fascistic social media strangulation bill being sponsored by Senator Mohammed Sani Musa of Niger State (BTW, why is Niger State the source of all the fascistic bills in the Senate?) becomes law, Mrs. Aisha Buhari, who fancies herself as “First Lady,” would be its first victim. Here’s why.

Last week, Senator Musa said on national TV that the principal inspiration behind his sponsorship of the bill was to punish people behind the previously wildly trending social media rumor that Muhammadu Buhari was going to get married to his dabino-stealing (former) mistress, Ms. Sadiya Umar Farouq, who masquerades as “Minister” of Humanitarian Affairs, Disaster Management and Social Development even though the real minister is Fatima Mamman Daura, Mamman Daura's favorite daughter. 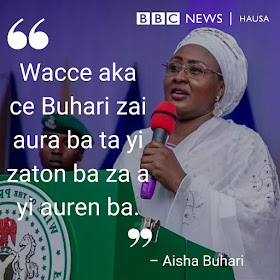 Well, Aisha Buhari herself confirmed this wedding rumor during her interview with BBC Hausa on October 13. “Wacce aka ace Buhari zai aura ba ta yi zaton ba za a yi auren ba,” she told BBC Hausa. Rough idiomatic translation in English: "The very woman Buhari was supposed to marry didn't expect that the wedding would not happen." In other words, according to Aisha, the wedding rumor had basis in truth and Sadiya, in fact, was prepared for the wedding until it was called off because of the unexpectedly unusual social media attention it generated.

People close to Aisha told me it was actually Aisha and her social media handlers who instigated the social media hype over the wedding in order to embarrass Mamman Daura and ultimately thwart the wedding. And they succeeded. I hope Senator Musa will come for her when he succeeds with his fascistic social media bill.

By the way, Senator Musa is the same APC party man whose company INEC contracts to produce card readers and PVCs for elections since 2015. That is ethically questionable. Of course, such a morally stained wheeler dealer would want to shut down social media to conceal his shenanigans.
Farooq A. Kperogi at 9:42 PM
Share