Nigerian Trumptards Are the World’s Most Annoying Humans

There's nothing more annoying in the world right now than reading intellectually impoverished Nigerian Trump supporters writing puke-inducing, ill-informed garbage on American politics about which they have zero understanding.

Trump is an out-and-out, in-your-face, scorn-worthy racist who thinks black people, including his clueless Nigerian supporters, are subhumans. His immigrant visa ban on Nigeria is simultaneously designed to halt the growing population of black Africans in the United States, which Nigeria leads, and appeal to his xenophobic conservative base. 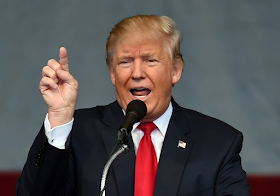 For instance, “Nigeria had the biggest drop in visitors to the US” in the world in 2019, according to data from National Travel & Tourism Office. This has roots in Trump’s racial animus against Nigerians (and, of course, other non-white people who come to or live in America).

Trump was widely quoted in January 2018 to have said he didn’t want immigration into the US from “shithole countries” like Nigeria and Haiti and instead wanted “more people coming in from places like Norway.” In other words, he wants only white immigrants.

In December 23, 2017, he was reported to have said people from Haiti and Nigeria should be denied visas because “15,000 Haitians who received US visas ‘all have AIDS’ and 40,000 Nigerians [who visited the US on tourist visas that year] would never ‘go back to their huts’ after seeing the US.”

And in 2016, Trump praised and promoted a book titled “Adios America” by American conservative activist Ann Coulter which, among other wild claims, said, “There were almost no Nigerians in the United States until the 1970s. Today there are 380,000,” which she said was a problem because “in Nigeria, every level of society is criminal.”

Trump’s claim that Nigeria was included in the immigrant visa ban because of “security” concerns is asinine at best. More than 90 percent of the terrorists who murdered Americans on September 11, 2001 were from Saudi Arabia. In fact, as recently as December 2019, a Saudi military trainee killed three Americans and wounded eight others in Florida.

No Nigerian has ever killed an American on American soil. Why is Saudi Arabia excluded from the list? Why are Nigerians, whom several surveys have shown as having one of the most favorable views of America in the world, excluded from gaining immigrant visas? Anti-black bigotry. Nothing more.

When you find Africans whose countries Trump, out of undisguised racial animus, called "shitholes" and "huts" and whom he has vowed to shut out of the US, praising and defending him, you know ignorance and internalized self-hatred run deep in the psyche of our people.

The worst part is that Nigerian Trumptards tend to be anti-Buhari. How can you love Trump and hate Buhari when they are more alike than unlike? If you defend Trump and attack Buhari, you need to see a psychiatrist and an educationist because you are both schizophrenic and uneducated.

Re: True Ethnic Origins of Nigeria’s Past Presidents and Heads of State
My February 15, 2020 column with the above title attracted more attention than I thought it would.  First, readers drew my attention to the omission of Sani Abacha’s name from the list of past heads of state. The omission was inadvertent. Abacha was a Kanuri man who was raised in Kano. His prominent Kanuri facial marks were the most visible stamps of his Kanuri ethnic identity.

Although Nnamdi Azikiwe was Nigeria’s first president, he had no executive powers. It would have been duplicative to list his name along with Abubakar Tafawa Balewa’s as Nigeria’s heads of state between 1960 and 1963.

I regard Ernest Shonekan as an extension of IBB's regime. He neither won (or even rigged) an election nor staged a coup—the two primary ways people got/get to power in Nigeria—and merely ruled for IBB by proxy. In any case, the Igbo and Egba/Yoruba identities of Azikiwe and Shonekan are not in doubt.

So I'd rephrase the first paragraph of my concluding thoughts to, "A distribution of the paternal ethnic identities of Nigeria’s presidents and heads of state shows that the Hausa and the Fulani each had two, and Yoruba, Igbo, Gere, Angas, Kanuri, Ogbia, Tuareg, and Etsako (or Afenmai) each had one.

There was also a lot of controversy regarding the paternal identity of Murtala Mohammed. One reader from Kano wrote to say that “Murtala is not from Auchi but rather a Fulani of Gyanawa clan in Kano. You may wish to refer to a biography of the Gyanawa written by Ibrahim Ado Kurawa, titled 'GENEALOGY OF THE GYANAWA.”

Yet another reader from Kano rehabilitated the old myth that Murtala’s father was a Berom from Plateau State.

And someone sent me a scanned copy of a June 10, 2007 Sun Newspaper interview where the late Major General David Ejoor claimed on page 13 of the paper that Murtala was Urhobo on his paternal side. “When he was head of state, his father came to see him,” he claimed. “Then he told his father, ‘All these years, you did not care for me. Now that I am head of state, you come. Go away. If I come down, I will kill you and I don’t want to commit murder.” 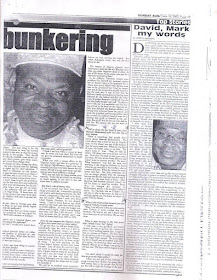 He claimed that Murtala’s father, who was supposedly called Irue, was a railway worker in Kano who married a Kano woman with whom he went to his hometown but whom he later divorced after marrying another woman. Murtala’s mother, he claimed, went back to Kano.

“After Murtala had finished primary school, he left for Kano to meet his mother. From there, he changed his surname to Muhammed, which is his mother’s father’s name,” he claimed. “So Murtala was an Urhobo man and that is why in his coup, he did not do anything against me. He knew we share the same Urhobo blood.”

I had never read this nor heard anyone even remotely suggest that Murtala Mohammed was paternally Urhobo. But it’s highly implausible that a Christian from the south would be allowed to “marry” a Muslim woman from Kano in the 1930s when Murtala was born.

Murtala Mohammed obviously doesn’t have the phenotypical features of a Fulani person, and could easily pass for a member of any of the ethnic groups often attributed to him. What is indisputable, though, is that, having been born and raised in Kano, he was culturally Hausa. I hope a living relative of his can intervene to put the question of his paternal ancestry to rest.

Lastly, Dr. Hakeem Baba-Ahmed, whose family I referenced tangentially in the article, wrote to say that although the paternal ancestry of the Baba-Ahmed family in Zaria is indeed traceable to Mauritania where Tuaregs (also called Moors or Berbers) are more than half of the population, they are actually Arabs. Read his response below:

My name is Dr Hakeem Baba-Ahmed. I just read your column in Tribune on the ethnic origins of Nigeria’s past heads of state. You made reference to our family, Baba-Ahmed of Zaria, asserting that it is Tuareg, not Fulani as is mistakenly generally assumed.

I thought I should correct the error, believing that it was a genuine mistake on your part. Our father was Arab from the Talaba Clan and Shingit in Mauritania. Most people familiar with centuries of history of Arabs in Mauritania and their origins in Saudi Arabia will recognize this description.

It is important to make this correction because, as you are aware, it is wrong in Islam to attribute wrong paternity or identity if the facts to avoid doing this are available. This is an ancestry we are both humbled by, and grateful for, the same way we are proud of our Nigerian nationality and identity.

The Tuaregs are a great people, and we would have been just as proud of a Tuareg ancestry if it was ours. But it is not, and it will be wrong to let go a major mis-classification of our family without an effort to correct it.

I hope you will be kind enough to correct this error, which, on the basis of the limited knowledge I have of you, I am sure was not intended.
Thank you, and best regards.
Dr Hakeem Baba-Ahmed.
Farooq A. Kperogi at 12:05 AM
Share